I came up with something random recently and decided to post it on here. Please tell me if you have any suggestions for this idea!

Ok, first the wings. I had this idea around a day ago to suggest a pair of wings that wouldn't take up a paw space (like regular wings or nimble fingers). This is so the nichelings would get to use their hands and be able to fly (they would probably be less powerful than regular wings, though, to have a slight trade off). This idea is... *drumroll please*...

Bug wings! I thought these would look pretty cool, and kind of fit the jungle vibe that I wanted for them. I came up with some that looked a bit like dragonfly wings, and one that looked like ladybug wings (because they're so unique with the spotted (usually) red shell and everything). I'll list the possible criteria for the bug wings and ladybug wings here:

- Invite an animal with these genes to your tribe

- Spend 30 days in the jungle/deep jungle

- Invite and animal with these genes to your tribe

- Spend 50 days in the jungle/deep jungle

ALSO PLEASE READ: Since I've fixed the amount of flight the bug and ladybug wings do, I want to say that, since the wings don't take up a paw space (like regular wings), they also don't come in twos (what do you think about this? I might change it later), so for now, the flight mechanic is the 'total' flight amount given by both wings, since you can't have just one.

I also have concept art for this, so I'll put it here (ignore tree concept, I put those together but I'll make a different post for it that I might link once I finish if I can edit the post afterwards): 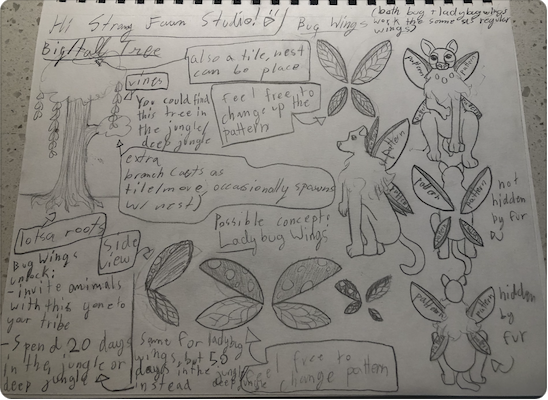 (Also, please ignore most of the text on the concept art, because I might've changed something. It also says on the art, "Both bug + ladybug wings work the same as regular wings", but I hadn't included the stats yet. Yes, although they do work the same since they both fly, they don't have the same stats).

Anyway, please feel free to include other suggestions, comments, or anything else (please tell me if these seem too OP, too)!

9 replies to this suggestion