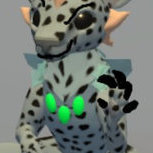 Here's an old suggestion back before even the mountain update, so it's pretty outdated, but I'm too lazy to (completely) fix it up.

I made another.. Suggestion.. With all of my old suggestions, but I've decided to split them up so they could be voted on separately.

Goats- stick near high ground, are less common then rabbits but get more common the more high ground there is (How about instead of that, they spawn on the mountains?). Has the same movement as rabbits and drops 5 food. There are male and female goats- Males have horns and can deal 2 damage to a nicheling that attacks it. Females can move faster than males (2 tiles instead of 1). takes 2 hits to take out (Let's just say it has 15 health or so), if there is just one it will run, if there are multiple they would stay and try to attack as they think they are stronger than the nichelings. (Could possibly be called Geep, Shoat, or something similar, as it could be a Goat/Sheep hybrid)Baby goats- spawn after turn if a male and female goat are near each other. only give 2 food but are easier to get. Stick near older goats and don't spawn that often (Perhaps they grow up in 3 or 5 turns and randomly become one of the genders?).﻿.