I think it would be cool if there were an ear gene to make bird-like creatures feel even more bird-like. These are some of my ideas of what a bird ear could look like. Please let me know which design(s) you like the best if any, and feel free to chime in with more ideas if you have any. Ultimately if there were a bird ear gene implemented, I would likely only want 1-2 (if they offer a lot of variety, then 2; otherwise, just 1 would be nice) to be chosen as "the bird/feathered ear allele(s)", so to speak. These are just some possibilities I came up with on the fly. 😉

Gene modifiers by each design (some of them have either/ors because I can't decide which is better; that's where your input comes in):

c. Phoenix-like layered feather ear. Is much longer and fancier than the feathered ear. Either +3 hearing (normal hearing) or +2 hearing (less than normal hearing because of the thick feathering around the ear), +2 cold resistance, -2 heat resistance (more temperature differences than feathered ear just because of the length), -1 or -2 camouflage (because they're so noticeable).

d. Tufted ear, a little like a great-horned owl's tufts called "plumicorns", which are not actually part of their ears, but I based this design off of them visually. This design also comes with the bird-of-prey "brow". +4 hearing (since it's based on a bird of prey, which is known for great hearing), +1 or +2 cold resistance (due to the extra feathering), -1 heat resistance (due to the extra feathering), -1 camouflage (because they stick up so much)  +1 camouflage in trees (changed because scientists currently hypothesize that owls with tufts benefit from their branch-like appearance), +1 speed (the thin, angled back design aids streamlining, which is important in fast movement).

e. Ear hole visible. Certain bird species have more clearly seen ear holes than others, such as ostriches, which have less feathering on their heads than many other bird species. Even though this design is based on ostriches, this doesn't mean that the nicheling's head overall would appear to have less fur. It just means that the ear hole can be seen as opposed to letter a's covered ear hole. +4 hearing (ostriches have good hearing, and the bare ear hole likely helps), + 1 heat resistance (because less feathering), -1 cold resistance (because less feathering). 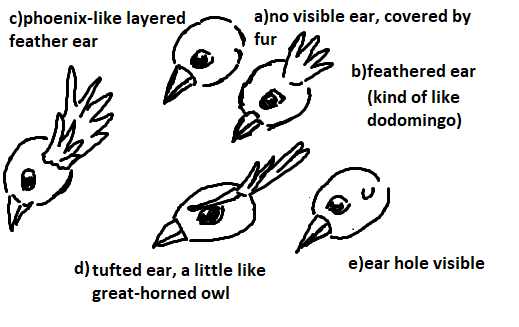 Thanks for considering this idea!