I know this isn't really a suggestion, but I think this is the best place to put this. This is basically the ultimate sandbox mode where it has suggestions that I took from others, suggestions I made myself, and suggestions that I thought of first but then someone posted about it. I do not think that all of this will be implemented; I just thought it would be best to just create the ultimate ideal instead of something with less. Also because of where I got the suggestions, anyone is free to separate any of my suggestions into their own post because I don't remember/know which ones are which anymore. For upvoting and comments, I'm thinking if you just like the format or not rather than everything. I also wanted to mention that I have not finished all of the concept art I wanted to make, but I felt bad about teasing this for a really long time and not posting it because I got really busy and haven't had time to work on it, so I will most definitely update this later (how much later, I don't know). Without further ado, here it is:

This is the new page that will appear when Sandbox mode is clicked (the buttons on this page are subject to change due to some pages not being fully thought out yet) (also I know that it says arcade mode and that's because I thought that have "challenges" would be arcade mode exclusive, but there is now a suggestion for that so I'll fix that later): 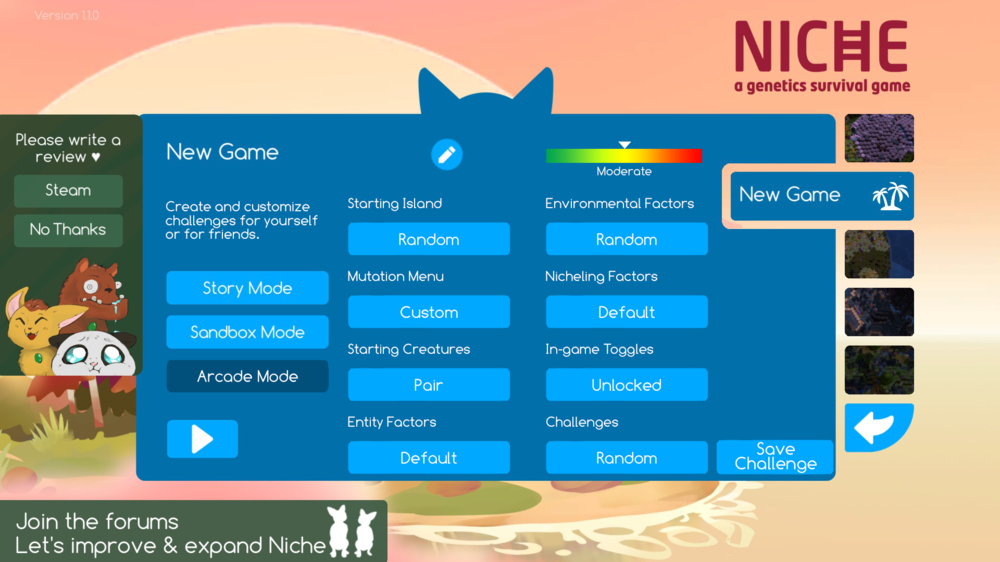 I think that these categories are best to fit all of the suggestions I've seen and will go more in-depth with each one when I get to them. You'll notice a difficulty meter in the upper right-hand corner which will shift depending on your options or due to combinations of your options. Also in the bottom right-hand corner, there is a "Save Challenge" button which is meant to give you a code to send to other players. Now I will start with "Starting Island" and go down from there: 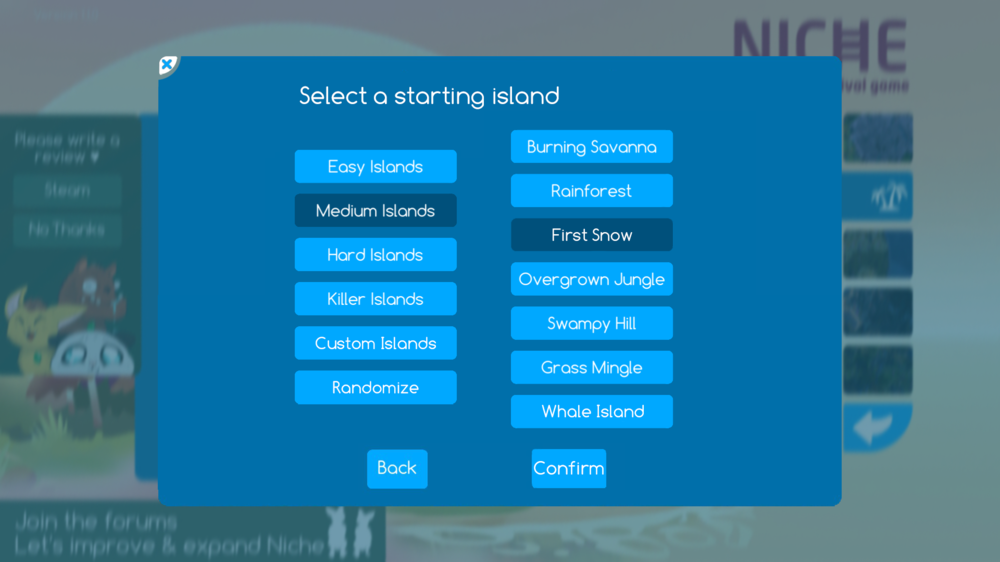 This is just a standard selection and is pretty self-explanatory. However, you will notice there are two other buttons not usually found on this screen: "Custom Islands" and "Randomize". 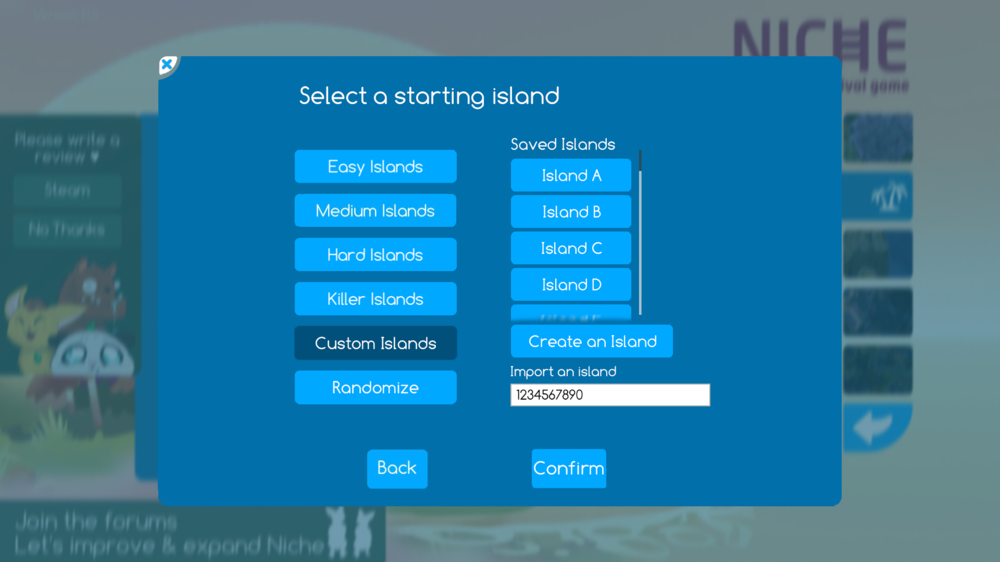 For the "Custom Islands" button, you will be able to create your own islands, play on previously made islands, or import islands. Selecting a previously made/imported island will look like this: 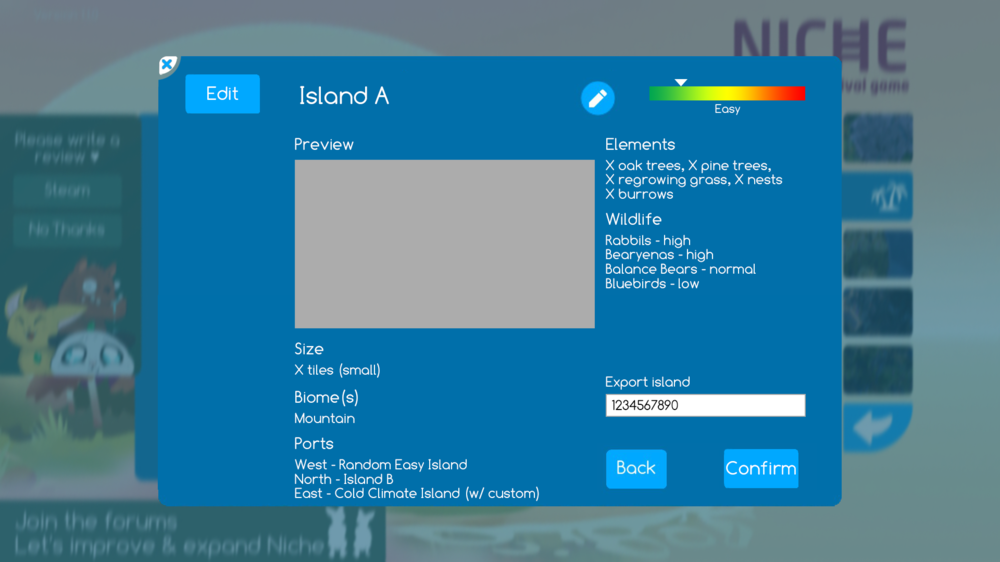 Creating islands can be very versatile. You can make a specific island with specific placements for objects like trees and rocks, or you can make it more general like having three burrows spawn somewhere on the island. I believe the rest is self-explanatory. Next is the "Randomize" button: 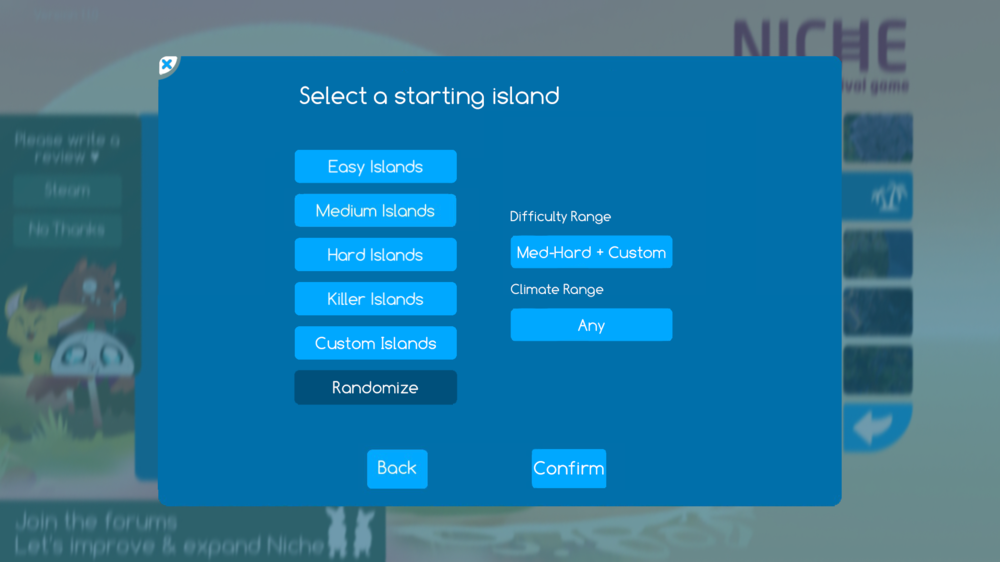 I think that this one is pretty self-explanatory as well. The next category is the "Mutation Menu" button: 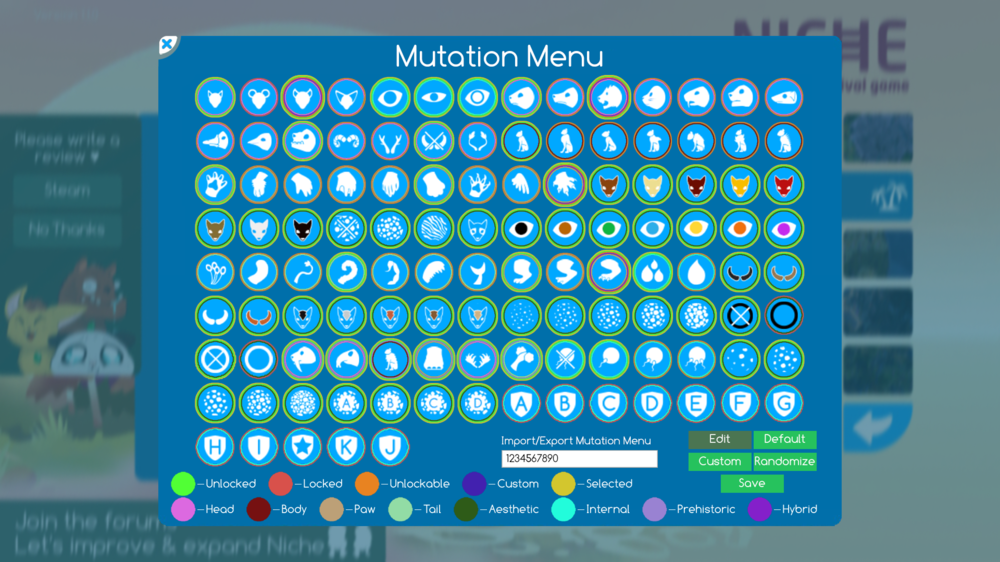 Here is a menu of all the genes in the game, not just the ones in the mutation menu. This allows one to add more genes to the mutation menu if they so desire. The green buttons seem pretty self-explanatory besides the "Custom" button. The "Custom" button allows you to edit the unlockablility of the genes meaning if you wanted to change the unlockability requirement for round ears to "discover all islands", you could. The color code may seem complicated, but you only need to focus on the top row. Clicking on any of the colors at the bottom themselves will allow you to either select or deselect all of the genes in that category. Double-clicking the colors on the top row in edit mode will allow you to change the status of those genes. The next category is "Starting Creatures": 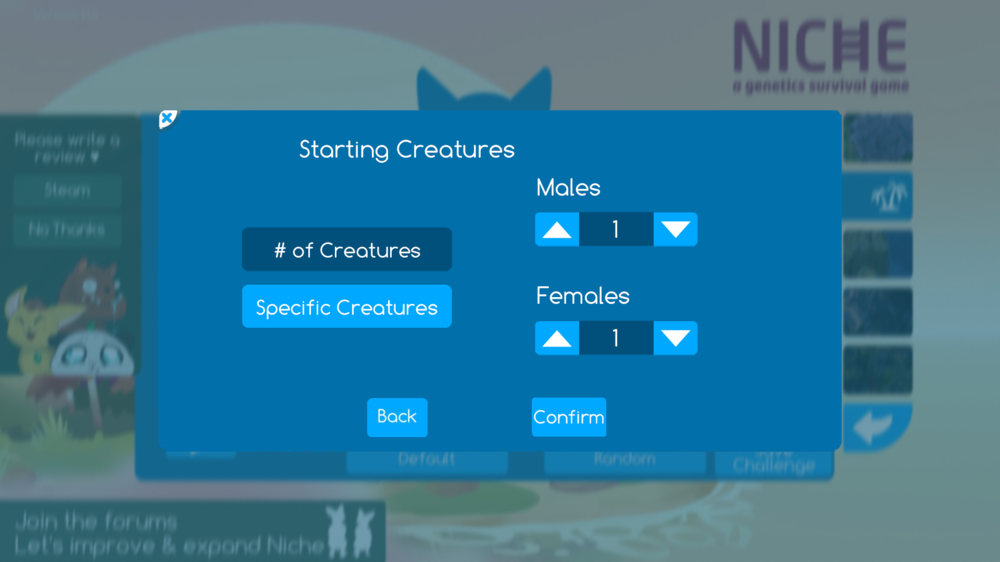 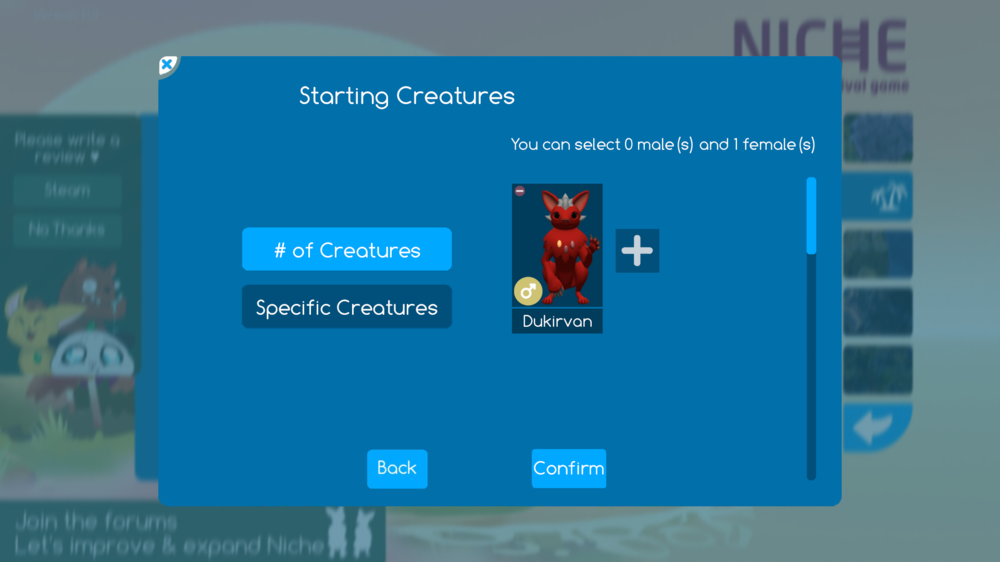 Here you can select the amount and specific creatures you want for your save file. In the future, I will add a random amount button to the "# of Creatures" button. For the "Specific Creatures" button, you can, well, pick specific creatures. You can create the creatures through a simplified version of my creature creator that only involves the ability to make one-off creatures. It currently isn't there, but in the future I will add a "Random" gene that allows you to have random aspects of your starting creatures. Next is the "Entity Factors" button: 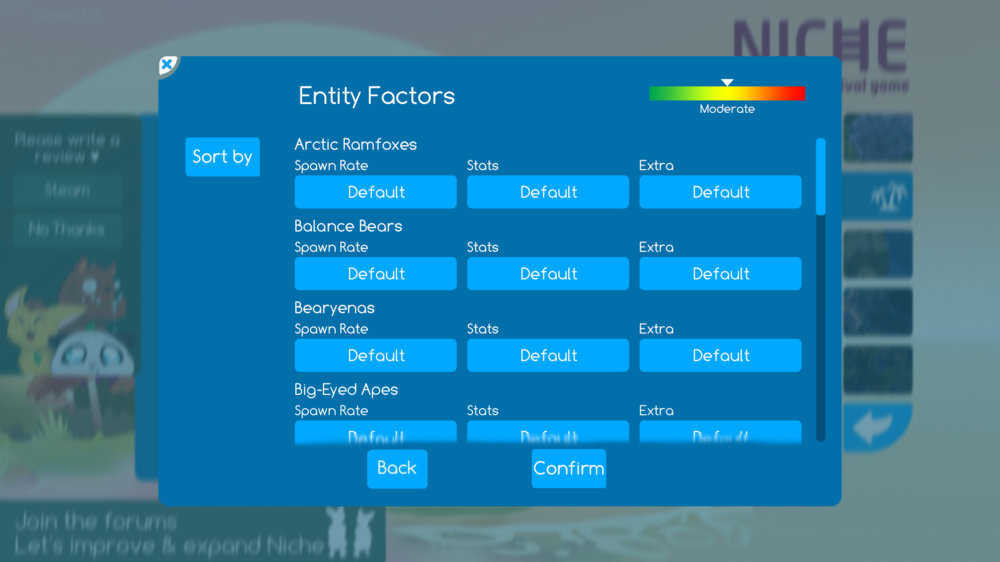 Here you can customize your wildlife. Spawn rate involves another screen that has a master spawn rate along with custom spawn rates for specific islands and island levels. Stats involve what you can typically see on entities such as strength, speed, collecting, etc. Extra involves anything from diet to fear to movement type. At the bottom of this page, there would also be a custom button. In the custom button, you can use one of the pre-existing entities as a base for a new creature that could involve simple color palette differences, size differences, and part editing. An example of part editing would be like making a balance bear have slightly longer and larger claws. Unfortunately, this is the last picture I have, but I will continue to explain the rest of the buttons.

The next category is "Environmental Factors". This section includes weather, plant life, starting food, and starting nesting material. The weather section would include a button for where, how often it would occur, and effects. The plant life section would include where, how often it would occur, effects, food provided, and respawn rate.

The final factor category is "Nicheling Factors". This section is about your creatures themselves and includes everything from lifespan (overall length and life stage length), food expendability, amount of energy, energy regained, dietary restrictions, sickness, population size (which could include island proportionality), and genes (which includes amount of mutations, hiding certain genes, gene dominance, and immunity genes (amount and importance).

Next is "In-game Toggles". This section is the most arbitrary as it acts as either an easy way out of mistakes made whilst in this menu or to sustain evidence of completion. What I mean by that is that this section either says you are allowed to change such qualities after the save file is made or not. Subjects that you are able to allow to change include being able to show genotype, gene unlockability, conditions, mutations, sickness, notifications, population size, and gene existence and rarity.

The final section is "Challenges". Here you can create custom conditions that can be more harshly reinforced in-game. So the game would give you tasks to complete with genes which could be either continuous or one-offs. ex: have only yellow eyes in your pack
You would also have the ability to customize what types of challenges, time limits, predators, disease, pack size, etc. The types of challenges you could have could be “Create a Creature” where you make a specific creature (which could vary in how specific), “Dominant Trait” where you make one or more traits be prevalent in all of your creatures (which could extend into phenotype or genotype), “Natural Selection” where you try to eliminate one or more traits from your pack (which could be paired up with other challenges and be ongoing meaning you can never have that trait in your pack), etc. There would also be an option for lives as in how many times you can fail objectives. You would also have a code to send challenges to send to other Niche players. The code could be set up as just a long number sequence where each number represents a stat. In the code, you might even be able to get really specific like the exact challenges you get.
ex. 050003 (followed by more 0s) would represent 5 challenged by the first two digits, an infinite time limit represented by the third and fourth digits, the starting island would be the grass adventure island represented by the last two digits, etc. (If there’s a better and shorter way to do this, then I’m game as well)
The game mode will end once all objectives are met, are failed to be met, all creatures are dead, or all lives are lost. If you have lost, there’s also the option to view the island. All creatures would have no energy and you couldn’t pass the day. It’s purely there for you to view your failed tribe and send it to others if you’d like.

So, that's that I guess. Please feel free to comment below if anything else needs to be clarified or whatever else. I most likely have an explanation, I just forgot to include it. I'd be happy to explain whatever!