I heard at one point that Rabbils weren't supposed to walk into the water again, but here I'm seeing one do so and I wanted to know if this was a bug.. I'm on version 1.1.9 by the way.

Edit: This probably feels pointless to me tbh.. it’s only my first time ever submitting a bug, and idek if it is a bug.. maybe I’m just ignorant. 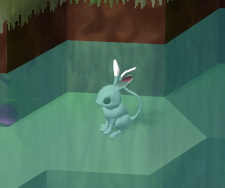