New feature: The Plague (add some new forms of sickness)

Now yes the bubonic plague is one of the worlds most devastating events that nearly eliminated civilisation in Eurasia, but it's still a fascinating topic, so fascinating that I think that a new type of diseases should be added, Plague. Now this sickness would be even more devastating than the common cold (and that's saying something) with the Plague not stopping at half health but would keep on going. Creatures must be at least two tills away from the contaminated creature in order not to get sick. The effects could cause the creature to not be mobile (could lose 1/2 actions), be less stealthy (lose scentless as well as stealth and other similar effects), bleeding would be even more devastating (cancels blood clotting), some sections of the creature may turn black in some sections (gangrene/dead skin). And if you could think of other effects write it down bellow.

Now I said creatures instead of Nichelings because I decided why don't we take it a bit further. The Plague sickness would effect every animal in the game, from small rabbils to Blue Birds, they would all be effected and could die from it. However there are ways to counter this. First would be with the NMR immunity (see below) which could be counter. Not only that but a more risky way to counter is by having two nichelings (or a beatyena parent) infected with the plague sickness and breed would have around a 56-98% chance to be immune to the plague. This is a reference to how some parents had their children immune to the plague when they had it during the time it was in its prime. Finally you could just avoid the creature entirely.

Hope this was interesting, Sincerely Biogamer 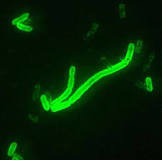