A body covered in scales that is unlocked in the mutation menu once you reach the swamp island, same as poison fangs, except instead of giving poison they cause an inability to be knocked out by the bugs since they wouldn't be able to bite through it's scales and add an extra +1 defense because again, scales, (though they wouldn't be as strong as the armored body so only 1 defense) and with the speed of medium body. this would be useful in the swamp area since its so overcrowded with bugs and stinky tale is unlocked in an entirely separate location, making it very hard to keep your nichelings from getting attacked by the bugs. Since it is a swamp and the poison fangs look so snake-like this feature would work really well there, I think this body type would have the colors of the poison body since it's not fur, it's scales.

I used a screenshot of a nicheling as a model to kinda show what I mean: 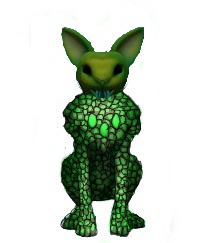 8 replies to this suggestion